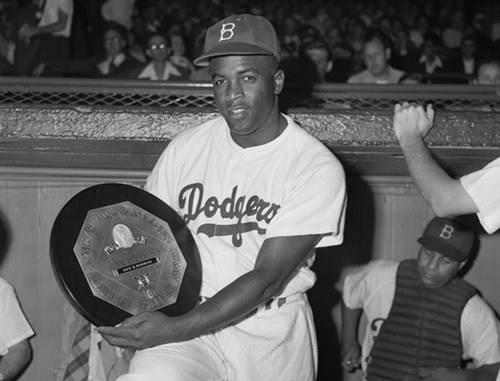 In 1947 the Rookie of the Year became an official award given by Major League Baseball to the rookie who performed the best that year. In the first 2 seasons of the award, only 1 award was given out for the entire league. It wasn’t until 1949, the 3rd year of the award, that they started giving out one award for each league (the AL and NL).

On September 19th 1947 Jackie Robinson was named the first winner of MLB’s Rookie of the Year Award. We all know Jackie Robinson’s story. What a lot of people probably don’t know is just how good Jackie was. Obviously his talent was overshadowed by what he went through just to play baseball. What is more impressive than anything is how he persevered through all the fucking bullshit he dealt with to be a fucking animal on the diamond.

In that rookie season Robinson batted .297, hit 12 HRs, and led the league in stolen bases with 29. He led his team to the World Series that year where the Dodgers lost to the Yankees. He also finished 5th in MVP voting that year.

No matter how you spin it, it was a fucking incredible rookie year for a guy who went through it all just to be there. You will always be a legend Jackie!