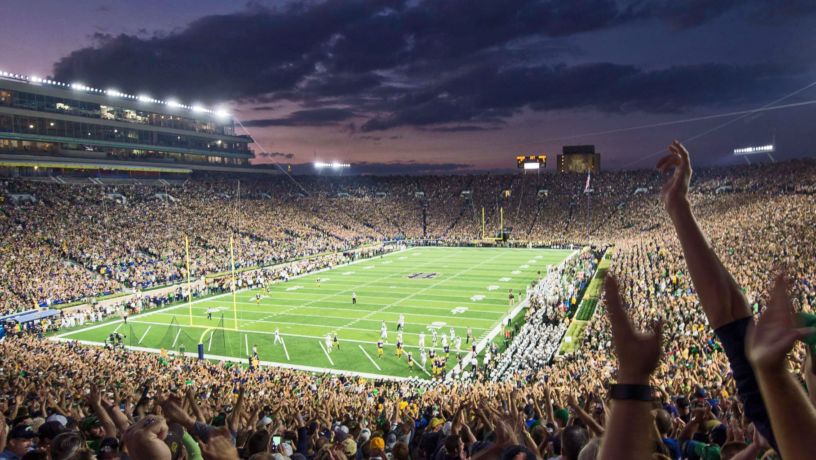 The University of Notre Dame is coming off an undefeated regular season that ended with a lopsided loss to eventual National Champ Clemson. Now people discredit Notre Dame for not playing in a conference or playing weaker opponents, but last season they had 4 wins over ranked opponents, with 1 of those wins coming on the road. Let me get this out of the way now: NOTRE DAME DESERVED TO BE IN THE COLLEGE FOOTBALL PLAYOFF LAST YEAR! They won every fucking game they played and they competed with Clemson for a quarter and a half before losing 30-3.

Now I know 30-3 looks real fuckin bad, but the fact of the matter is this game was closer than the score indicated. All-American CB Julian Love got hurt during this game, and two plays after he left the field, Clemson scored on a deep ball to Justyn Ross, the man Love was shutting down. Then with 2 minutes left in the first half, and Julian Love still sidelined, Ross scored again. Who knows what would have happened had Love stayed on the field, but I can almost guarantee the score would not have been as lopsided as it was.

Now that I got that out of the way, let’s see what 2019 has in store for this Irish team led by Ian Book.

Louisville is coming off a horrible season. They went 2-10 and would up firing the ultimate chode of college coaches, Bobby Petrino. With a first year coach, Notre Dame should have no real issues here.

A CFP determining matchup looms as the Irish host the Lobos. After finishing 3-9 in 2018, New Mexico is not expected to be much better this year. Too bad of a team for it to be a trap game as well.

In what could be one of the more meaningful games for the 2019 CFP, Notre Dame travels to number 3 ranked Georgia. Many people are predicting Georgia to overtake Bama in the SEC this year, as Kirby Smart has probably his best team yet at Georgia. Fromm is gonna compete for the Heisman (maybe) and D’Andre Swift is going to run all over the place this year. Notre Dame has a solid enough defense to keep these guys in check, so in my mind this game will come down to whether or not Notre Dame’s O-line can protect Book and open up some holes for Armstrong and Jones. This game will be close but Georgia’s defense will make enough plays to squeak this one out.

If Notre Dame were to actually pull the upset off against Georgia, this might be a let-down game for the Irish. As I have predicted they will not, ND will win this game against a UVA team that is better than a lot of people think.

Bowling Green fucking blows. They gave up an ass ton of points last year and it will likely continue this year.

Last season, this game almost doomed ND. I remember watching and almost throwing my beer throught the fuckin TV as JT Daniels picked apart the Irish defense for most of the first half. This year will be different. Notre Dame may run into some issues, but no real trouble picking this one up.

Off the bye, ND goes to the Big House to try and knock Michigan out of the CFP race. Shea Patterson will be in midseason form, but this is not near the same defense Michigan had last year and Book did not start against them last year. Book has his national coming out party as he leads the Irish to the biggest win of the season.

The Hokies lost quite a few assets heading into this season. ND traveled to VT last year and straight up embarrassed the Hokies, and I do not expect a different result this time around.

Duke lost Daniel Jones and really are not on the same level as ND. But that is why we play the game. ND has a rivalry game with Navy next on the schedule and I think Duke will give ND everything they have. I do not think it will be enough, but it will be close enough for me to have my butthole puckered up for most of the second half.

This game is always one worth watching. Navy always plays ND tough and they are always so well disciplined and very rarely make any mistakes. This year that probably won’t be the case. Notre Dame is superior in every facet of the game.

BC finished at a solid 7-5 last year and are looking to improve that this year. This game will not help as BC gets manhandled in South Bend.

This will be the game that dictates whether or not the CFP Committee has a decision to make or not. If the SEC and Big 12 teams beat up on each other, Notre Dame will squarely be in the middle of the CFP convo. Traveling to Stanford is no easy task to ensure that conversation is had. David Shaw is a great coach and you know he’s gonna have his guys up and fuckin ready to ruin ND’s CFP chances. Sorry David, it aint gonna fuckin happen! It will be scary, but ND will pull it out.

These predictions have the Irish at 11-1. If Georgia and Oklahoma lose before their conference championships, Notre Dame has a very good shot at getting in again. Only time will tell but it will be another fun season (especially if they prove me wrong and beat those bitches in Athens)!